Review: Sinners and the Sea by Rebecca Kanner 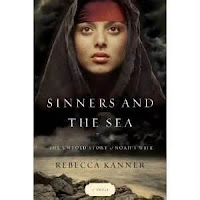 Sinners and the Sea by Rebecca Kanner

In the spirit of Anita Diamant, this ambitious and unforgettable novel about the story of Noah blends Biblical history, mythology, and the inimitable strength of women.

Cursed with a birthmark that many think is the brand of a demon, the young heroine in The Sinners and the Sea is deprived even of a name for fear that it would make it easier for people to spread lies about her. But this virtuous woman has the perfect voice to make one of the Old Testament’s stories live anew.

Desperate to keep her safe, the woman’s father gives her to the righteous Noah, who weds her and takes her to the town of Sorum, a land of outcasts. Noah, a 600-year-old paragon of virtue, rises to the role of preacher to a town full of sinners. Alone in her new life, Noah’s wife gives him three sons, but is faced with the hardship of living with an aloof husband who speaks more to God than with her. She tries to make friends with the violent and dissolute people of Sorum while raising a brood that, despite a pious upbringing, have developed some sinful tendencies of their own. But her trials are nothing compared to what awaits her after God tells her husband that a flood is coming—and that Noah and his family must build an ark so that they alone can repopulate the world.

Kanner weaves a masterful tale that breathes new life into one of the Bible’s voiceless characters. Through the eyes of Noah’s wife we see a complex world where the lines between righteousness and wickedness blur. And we are left wondering: Would I have been considered virtuous enough to save?


My Thoughts:
It's one of the oldest stories in the Bible, brought to life by Rebecca Kanner in "The Sinners and the Sea."  Everyone knows the Bible version, which mentions Noah and his sons building the ark.  But there is no mention of a wife.  This is her story.
Born with a large mark upon her face, Noah's wife was never named.  Many considered her to be marked by a demon, keeping her from being accepted by anyone but her own father.  Even after her father gives her to the 500 year-old Noah to be a good, submissive wife, she still struggles with her identity and being nameless (as Noah didn't provide her with a name, either).
The book is richly written and vividly described as we view the world as we never knew it.  Noah's wife becomes a faithful and committed with to Noah, even though he is constantly pray to and preaching God's word.  She never questions God's command to build an ark for the coming flood, though at times I'm sure she must have had some doubts.
I jumped right into this book because I loved Anita Diamant's "The Red Tent" so much.  It definitely didn't disappoint.

Renee
Hi, I'm Renee! I wanted to start a blog to share with others what I was reading and what I thought about it. I've been an avid reader since I was 10.